Getting back to books

When I looked back at the end of last year at how many books I’d read and realised it was only 18 for the whole of 2015, I was not best pleased (understatement.) Therefore over Christmas and New Year I resolved to do-something-about-that and set an achievable target of spending one hour at least four days a week in our designated reading chair in the bedroom. Largely to get my arse away from the sofa and from extended mindless hours in front of nothing in particular on the telly-box, which was the default evening routine most days. Also to try and re-engage more fully with written words (the evening telly-box mindlessness had spilled over into reading, courtesy of mindless social media scrolling and therefore he norm had become disengaged reading, not just online but of anything really.) A sad state of affairs.

A few days into the-great-intentional-reading of 2016 Mr I joined me so the TV now goes off in the early evening, unless there is a specific programme to watch. And reading does not have to leave the sofa. Happily by the end of March I have read nearly as many books as I did in the whole of last year.

All three books spoke loudly and clearly into the drought that I knew I was experiencing because of disengaged reading, namely that I needed to pay attention more closely to what I read (whatever the book or genre.)

Coming Clean was the book I finished just prior to the start of Lent and this also encouraged me to enter into intentional forgiveness during the Lent period. Sitting for a while each day as often as possible with God in front of a list of people who enter my head space for all the wrong reasons, where scenarios play out over and again, or heckles rise and stay that way for longer than is healthy.

I was encouraged after a few days of sitting and praying with the list, that head space residence started to subside in some situations. There are after all some people you have to interact with like it or not. Therefore practising forgiveness as a regular thing, rather than waiting for an offence to occur took some of the wind out of stewing on situations or time spent working through them.

Naturally being the flawed human that I am, meant that once I was on a roll with the forgiveness thing, I found reasons not to practice each day (yes I’ve done the work, it feels good so let’s trundle on with that for now.)

We then we heard of a couple of deaths during the Lent period, one of which was particularly tragic and winded us both somewhat. Of course that is the very time when drawing close to God in any capacity is a good idea rather than bolting off finding things to ‘do’ to try and forget about the pain (chocolate, trash TV, trash Social Media for starters.) But on the other hand I know God hears our grief expressed as inner groans; it doesn't feel like the articulation of 'conventional' prayer, but these are often the deepest, heartfelt and most honest cries from our souls.

After this mid-Lent hiatus from the forgiveness practise I found that the persons on the list were beginning to invade my head space again and not only that, it felt like a pile on. A big, fat signal if ever there were one, that I needed to get back on track with the work of forgiveness.

So I will be sticking with this beyond Lent, quiet before God, praying forgiveness over the list and listening to what God is saying in the quiet.

The journey goes on and I have yet to get out of the habit of mindless Social Media scrolling in the margins when I'm tired or bored. I have moved some of the people I follow on Twitter onto lists; I am interested in what they have to say and maybe dip in to the lists up to a couple of times a day, but it helps me take control over the choice to look at associated conversations, discussions, rows which are for me a MAJOR distraction and often an unhelpful trigger for 'all the feels', which in themselves can lead to depressive episodes.

I'm so thankful for the encouragement I found in the three books above and that God opened my ears to what He is saying through them.

(And of course it goes without saying that the reading goes on regardless)
Posted by Piano_Jo at 14:53 No comments:

When people tweet about it on Sundays and tag their church or worship team I often wonder what makes for a brilliant/amazing worship service/experience.

Yesterday we the worship team at our church were publicly thanked in the service by the minister for the worship. This is as rare as a month with five Sundays.

There’s not a particular formula we follow to get a 'good' result. We put in the practice as we do during most weeks and through warming up on Sunday mornings.

We are all unpaid amateurs who love Jesus and love music as much as each other (work out what I did there.)

My actual personal preparation that I do when I’m on the rota to lead, is for an hour or two on the Saturday:

I can honestly say I didn’t spend ages praying when I woke up yesterday morning. And as more often than not we were a little late leaving the house for church to get there for the time I’d asked everyone else to be there. My left ear was a little blocked and I forgot my glasses too (*lack of glasses is where the muscle memory practice really kicks in.)

And so I will continue to say it's something of a mystery how things turn out.

The majority of the time we turn up, do our stuff, and someone might say ‘thank you for the worship’ if they are stuck next to you in the coffee queue after the service or if the minister has done a ‘be thankful’-type message.

If we had a prayer/preparation formula that we followed it would cease to be about God. And God doesn’t actually need us to do the work of corporate worship, but He wants us to.

Not a deep piece. Random musings. Just musician, writing here and recording thanks.
Posted by Piano_Jo at 22:21 No comments:

Many are the thoughts that have passed in and through my mind this summer, especially around social media.

Continuously shuffling but never dealing and putting cards on the table.

I have toyed with stepping off the social media carousel and have spent time reading blogs of those who have/are doing. But..


NOTICE or BEING NOTICED

How come someone with a high profile gets a gazillion likes and shares when they post a picture of a pair of shoes? 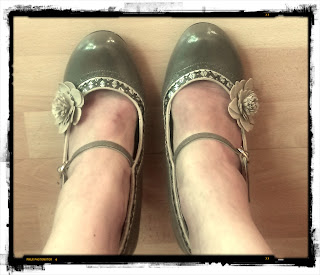 Is it how cleverly we play to the gallery?


I say that I like the smallness of my social media world, some days I disagree with myself and start to measure my worth by it.

And I guess that is it in a nutshell, how we measure our worth.

I recall some meaningful interactions and their timings:

All these is when this happens: 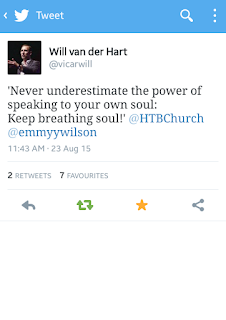 Some days the thing you need to notice is right in front of you and you don't have to share it with the world.
Other times you just need to keep on scrolling to find the things that really matter.

I found myself mulling over these words last night as I put away a couple of cards from work. My job finished on Friday, budget cuts meaning release of all temporary staff. People rooting for nice things to say in the awkwardness:

Yes there are some people from this workplace where effort will be made to stay in touch now we are no longer in close proximity for 37 hours each week.

Yes some of the keeping in touch is guilt laden because of the manner of release (please let us know where you go next so we don’t feel so bad.)

Sometimes though these three words are tossed carelessly into the air for something to say when we find ourselves at the uncomfortable point of saying goodbye to someone and moving on. Because we don’t know what else to say.

There is one person in my life for whom keep in touch is a diktat. Someone who wants me to do runabout because they want a self-centred need to be fulfilled and this neatly avoids them having to ask for help.

Over the years we have moved around a fair bit so I have encountered a number of farewells. I aim to try and only use keep in touch honestly and not throw it away. But I am sure that in reality when the goodbye moment arrives, there has probably a good deal of word-tossing.

Equally in the awkward, help-stop-this-scene-going-on-forever situations like last Friday in the office I genuinely have no idea what I said in those last minutes as I clocked out for the last time.

PS I am taking a few weeks off in the run up to a close family wedding before resuming a search for new work
Posted by Piano_Jo at 15:26 No comments:

If you have come to this space via Twitter you won't find much recent writing.

From May 2014 I started reacquainting myself with knitting due to the news that we would become first time grandparents in December 2014 (OK I went a bit OTT because all the patterns I found were so darned cute.) I found a wonderful wool stockist Tangled Yarn who lives just up the road and sells the most divine wools and boom, I was hooked! Not only was it blankets and clothes in minature, but suddenly people were getting scarves as presents (whether they liked it or not.)

Just around the time that grandson was born our daughter announced her engagement. Quite quickly she and fiancee decided to get married sooner than originally planned leaving us with nine months to plan from the beginning of 2015. I volunteered to knit bridal and bridesmaid shrugs and once the patterns were agreed, I have since found myself on a schedule to complete them in time.

So currently creative outlets are knitting, music (leading worship at church at least 2x per month) and photography (mainly grandson though I am also on Instagram as piano_jo ) Worship leading weeks involves several hours of preparation and practice, to-ing and fro-ing with others along with the full time job, blah, blah.

Writing is on the back burner for now but I will be back (my head and those around me need it..) 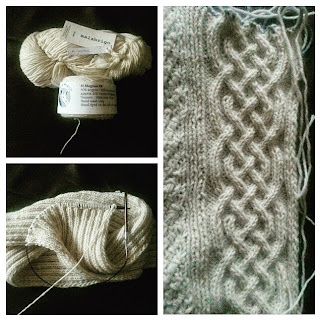